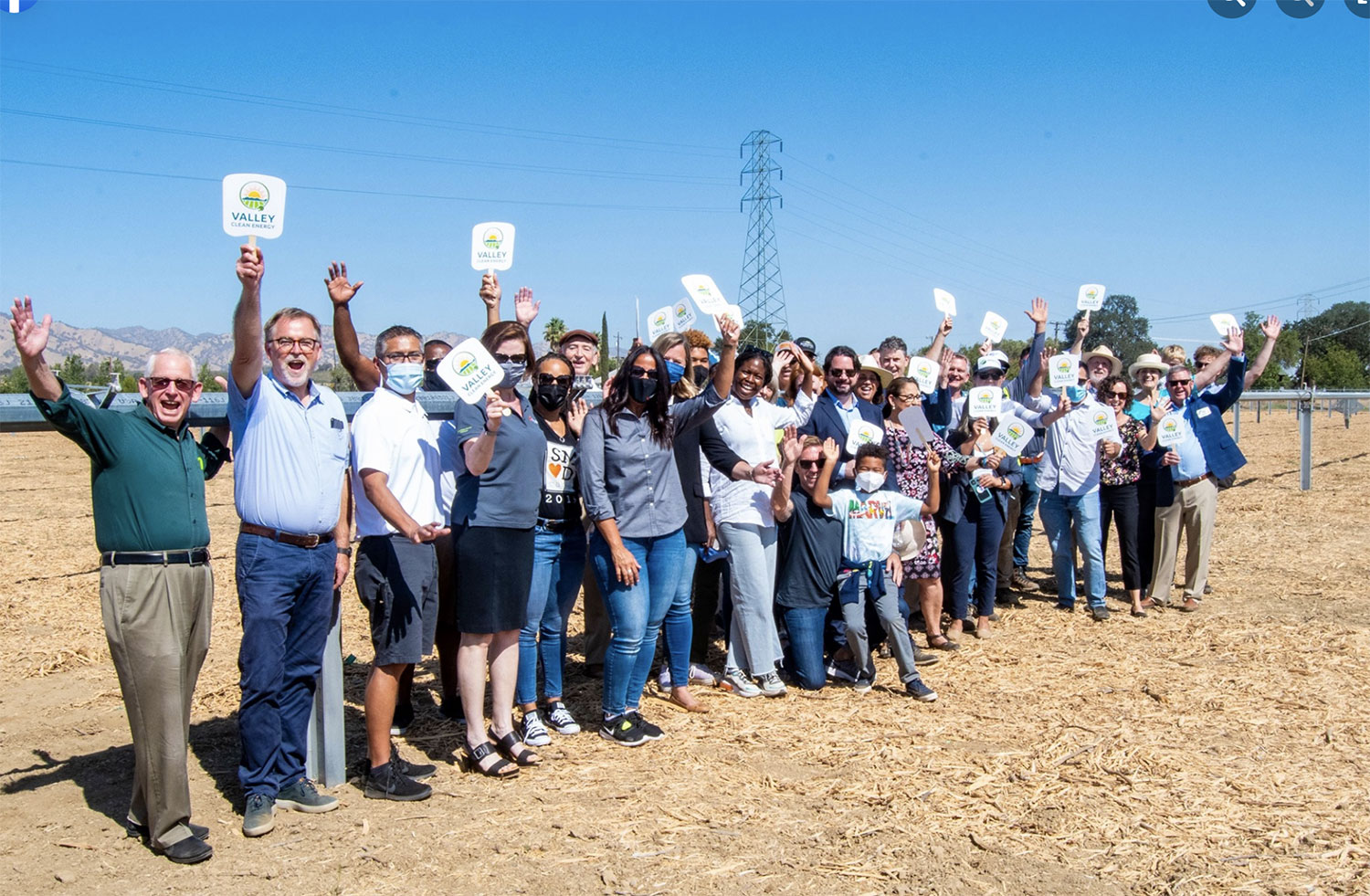 WINTERS, Calif. (August 12, 2021) — With the public unveiling of a 3 megawatt solar+storage farm west of Winters, Valley Clean Energy (VCE) took another step toward its goal of providing more local renewable power generation for its customers.

The 20-year agreement with Putah Creek Solar Farms, LLC, for 3 MW of solar energy and 3 MW of battery storage was approved by VCE’s Board of Directors last December. Valley Clean Energy is the local electricity provider for the cities of Winters, Woodland and Davis as well as the unincorporated portions of Yolo County.

Assemblymember Cecilia Aguiar-Curry, a longtime Winters resident who was the city’s first female mayor, applauded Winters area farmer and project co-owner Dan Martinez as a “visionary,” while adding that California must triple its annual solar and wind installations to meet its goal of a carbon-neutral grid by 2045.

“Because of the threat of more frequent wildfires in California, we must do everything possible to increase local reliability in the electricity supply and systems,” Aguiar-Curry added, pointing to the Winters project as a key piece of the puzzle.

Winters City Councilmember Jesse Loren, Vice-Chair of the VCE Board of Directors, reminded those present that VCE has set an ambitious goal of providing 80 percent renewable energy by 2030, with up to 25 percent of that coming from local sources.

“Winters is an agrarian community; it’s a farming community,” she said. “And do you know what we’re farming today? We’re farming energy, and I couldn’t be more proud of that.

“What we need are local jobs: that’s how we’ll reduce vehicle miles traveled, that’s how we will help with our own climate goals. And this is a beautiful match,” Loren said, pointing to the project site. “It’s local jobs, local energy, feeding our grid locally.”

Mitch Sears, Interim General Manager of VCE, told the gathering of local politicians, policymakers and industry professionals, “We’re here to mark an important milestone for energy production and planning at the local level.

Sears said the project answers some of the objectives that the VCE Board of Directors has established: to diversify the local energy supply, to create local renewable energy jobs and to take action at the local level to address climate issues. Co-benefits of the project, he added, include an opportunity to increase the efficiency and reliability of the local energy system and for the project to promote better public understanding of how the electricity system works in Yolo County.

“So, practically speaking, being right next to the (PG&E) substation is as efficient as you can get,” Sears said.

Property owner Dan Martinez mentioned that 8,262 photovoltaic panels and the battery storage system will occupy approximately 19 acres of a 31-acre property that once was a walnut orchard. Commercial operation of the project is expected by November.

The Putah Creek Land Co. also built a 15-acre solar array just south of this property in 2014; energy from that plant is sold to PG&E.

“Yolo County has a long history of protecting agricultural ground,” said Martinez, who is joined in this effort by his longtime partner Santiago Moreno. “But they also understand the fact that there’s a balance. In this case, we’re removing trees that were one resource and now we’re producing a different resource.”

In addition to the Putah Creek Solar Farm, the VCE board also approved the Gibson Renewables project last December, which is expected to generate 20 MW of solar energy and provide 6.5 MW of battery energy storage. Commercial operation of that project, which is along Highway 16 between Madison and Esparto, is targeted for late 2022.

Together, the two projects are expected to satisfy nearly 10 percent of the energy needs of VCE’s entire service area.