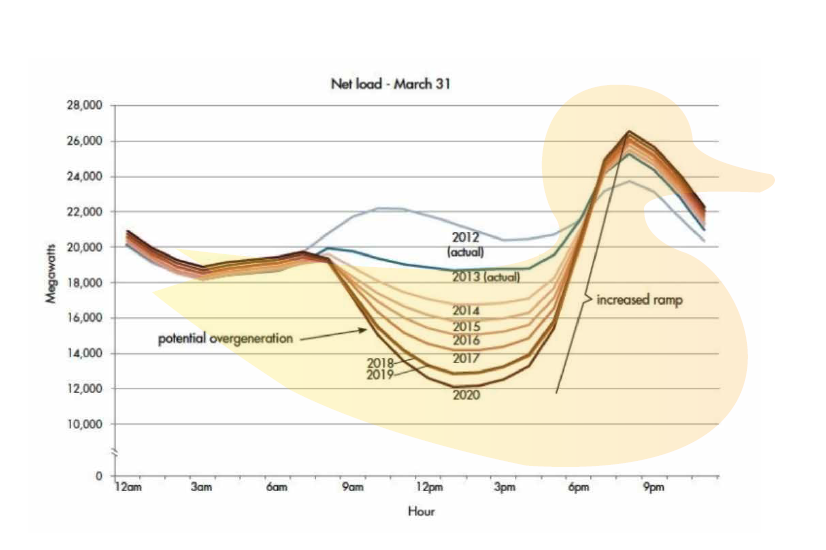 Your electrical load curve, that is…

Why electricity prices shift, and why it matters to informed customers like you

You may have heard about Time-of-Use (TOU) electricity rates, and that using electricity during times of the day when there’s less demand will cost you less on your electric bill. But you may not have heard about the “duck curve” created by solar generation, or why it’s important to you.

The generating capacity of photovoltaic (PV) systems has increased dramatically over the past decade, as more solar has been installed, and as technology has improved. Solar (including solar thermal plants and rooftop PV) may be responsible for generating more than half of the capacity needed on peak summer days—a percentage that might have been unthinkable just a few years ago.

Meanwhile, conventional utility-scale generating capacity (including gas turbines, nuclear and to a lesser extent hydropower) has remained stable. These facilities are effective for meeting “base loads,” or the minimum electrical power needed on the grid at any given time, but ramping these sources up or down to meet varying loads is both difficult and expensive.

With so much solar on the grid, PV generation naturally follows the sun and results in excess power generation during the daytime (when there’s less demand) and a shortage of power in the evening (when there’s more). When energy demand or the amount of energy supplied by the electrical grid at any given time is plotted on a graph, it is represented by the “duck curve” shown below. This curve shows how solar generation has increased since 2012. It also illustrates the impact of solar generation on the profile of electrical energy use and how quickly other forms of power generation must be ramped up to meet the evening load. During some time periods, excess daytime generation can produce so much power that wholesale electricity prices become negative, and some generators are actually asked to curtail their power generation. 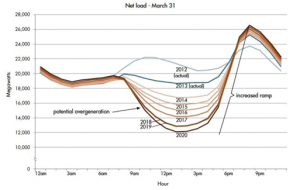 It’s in everyone’s best interest to try to flatten the duck curve—here’s why:

There are two economic reasons to reduce peak load, or to lower the “head” of the duck. First, if you are on a Time-of-Use rate (TOU) schedule, you can lower your utility bills by shifting away from use during peak hours (3-8 pm for TOU-A, 4-9 pm for TOU-C and 5-8 pm for TOU-D). If you limit your electricity usage to off-peak hours, it will cost you less—it’s that simple.

The second reason has to do with what it costs Valley Clean Energy, or any power provider, to purchase wholesale power. Like all load-serving entities, VCE has an obligation to the California Public Utilities Commission (CPUC) to meet certain “resource adequacy” requirements, ensuring that they will have more than enough power to meet forecasted customer needs as well as unanticipated spikes in electricity usage. These needs are known as “peak loads.” The higher the historic peak loads are, the more expensive these contracts become. In short, with greater usage at peak hours, VCE’s cost to meet that usage is higher.

Whether you’re on a TOU rate or not, every VCE customer benefits when the cost to purchase power is lower—it’s simple math. Therefore, it is in everyone’s interest to reduce electricity use during peak periods, keeping your bills lower and power contract costs lower. Reduced power purchase costs can be returned to customers in the form of lower rates, and financial reserves can be used to fund programs that benefit our customers.

What can you do?

As a homeowner, there are several things you can do to flatten your load curve. If you are a renter, these are also things you and your landlord can do. Keep in mind that financial incentives may be available for many of these actions:

If you are a business owner, there are also things you can do: