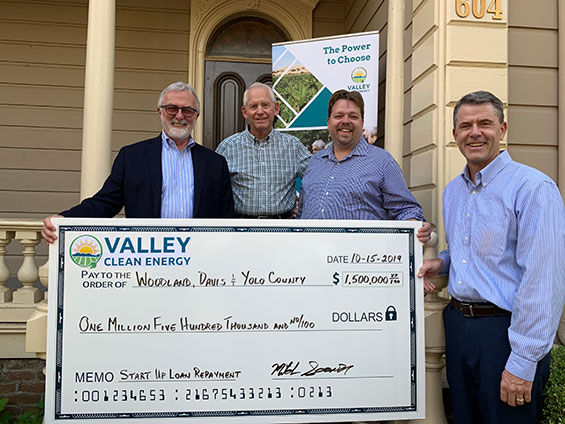 Valley Clean Energy’s board of directors has announced that the local community choice energy agency is repaying its start-up loans early, years ahead of schedule.

VCE was formed in 2016 as a joint powers agency comprising the city of Davis and the unincorporated area of Yolo County. The city of Woodland joined later, in 2017. Each agency lent VCE $500,000 to cover program implementation costs with a requirement that the loans would be repaid with interest.

“Now, after less than 1½ years in operation, we are repaying the loans — far ahead of schedule,” said Tom Stallard, a member of the Woodland City Council who chairs the VCE board of directors. “The agency’s firm financial footing allows us to do so.”

Added Lucas Frerichs, a member of the Davis City Council and another VCE board member, “Through Valley Clean Energy, we’ve taken a big leap toward a more sustainable future for our communities. And to have done so in such a fiscally responsible way is even more gratifying.”

In contrast, PG&E’s standard electricity product for 2018 was 39 percent renewable, and the average for California as a whole was 31 percent, as estimated by the California Energy Commission.

“We exceeded our goal even while matching PG&E’s rates,” said Gary Sandy, representing the Third District on the Yolo County Board of Supervisors and VCE board member. “And as a not-for-profit entity, VCE is investing its revenues back into the local economy. Our board is in tune with our communities and is responsive to their priorities and needs.”